Floating structures for the aquaculture sector

Since 2009, TEPSA has manufactured and installed numerous floating structures for the aquaculture sector.

The design and manufacturing of floating installations for the cultivating marine species is an activity requiring the application of expertise and technical knowledge. TEPSA has a team of engineers, designers and technical experts specialised in aquaculture who, together with the aquaculture farmer, develop each project so that it adapts to the needs of the cultivated species and to the peculiarities of the area where the installation will be located.

In chronological order, the most relevant installations executed are: 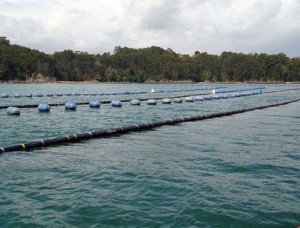 In the Ares-Sada estuary there is an authorisation granted by the Xunta de Galicia for mussel farmers to be able to install floating lines for the mussel spat collection, wich will then be transferred to mussel rafts for the growout phase.

The problem of traditional floating lines systems (buoy longlines) is that, when the spat ropes are mature, the lines tend to sink due to overloading. This sinking triggers the implosion of the buoys, wich further reduces the available flotation, rapidly causing the collapse an progressive sinking of the whole line.

The system of floating pipes resists up to 15 m. immersion without deforming the pipe, maintaining at all times the net buoyancy of the system. Furthermore, it simplifies the installation, without the need for parent lines for the connection of the floats, making it a much more secure structure for anchoring and with improved performance with regards to waves, currents and winds.

The system installed for this company is formed by 25 m. pipe sections wich are attached to each other by means of a large plastic screw and nut, forming 75 m. lines total length. 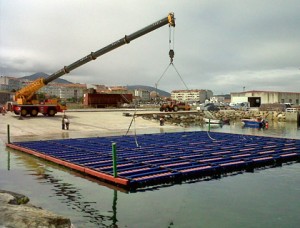 The San Bartolomé de Noia fisherman’s guild built in 2009 a land-based hatchery for restocking harvesting areas. The objective of this hatchery is to maintain and improve stocks, as well as to regenerate and restock new shellfish beds.

The cost of growing spat on land based installations (hatchery) is very high, for it involves months of food production (micro-algae), water pumping, lighting, etc. In order to reduce these costs and increase the productive capacity of the hatchery, the last stage of the juvenile pre-fattening must be carried out in floating structures (mussel rafts). Juveniles that have been growed at sea have also been shown to survive to a greater extent to the breeding in shellfish areas, this could be due to them having become accustomed to water conditions (inside the hatchery water is filtered and temperature-controlled).

This mussel raft has a design wich makes working on its surface easier, with wide passages and slip-ressistant surfaces. This way, working with the spat holding devices is both very comfortable and safe. 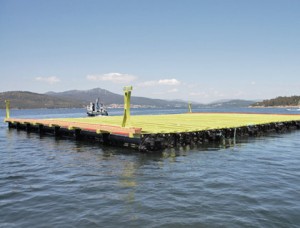 Given the volume of bivalve seed wich is expected to be managed at times of maximum hatchery productivity, the Noia fisherman’s guild ordered a second TEPSA polyethylene mussel raft.

Based on the experience of the first mussel raft installed for this use, several improvements were undertaken in order to guarantee working in the same safety conditions but increasing the freeboard and including a slatted floor similar to that of a traditional wooden mussel raft. In order to achieve this, the flotation system was modified, wich now includes floats at two heights and further separated from each other. Furthermore, the layout of the anchoring is improved as well as the “whips” (protections for the ship docking). 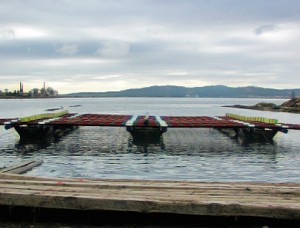 In partnership with the company Forjas del Salnés S.L., devoted for over 50 years to the construction of traditional wooden mussel rafts, TEPSA developed a new concept of mussel raft with main beams, cross-beams and hanging beams made in high density polyethylene. Flotation guaranteed by 6 steel deposits, as with traditional mussel rafts, whilst the slatted floor and hanging beams is made up of special pipes with different diameters and thicknesses. In order to obtain the required resistance new tools had to be developed as well as using new manufacturing methods and special raw materials.

The result is a much more flexible and light mussel raft wich is more resistant to adverse sea conditions. In all the production obtained since its installation, the polyethylene mussel raft has proved to have 20% less cultivation loss (less shaking action on mussel ropes from waves) compared to other traditional wooden mussel rafts in its surroundings. 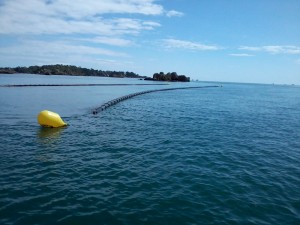 With the aim of diversifying their activity, french aquaculture farmers are increasing the volume of mussel cultivated with regards to oysters. In the north of France, the magnitude of tides, heavy storms and the lack of shelter make it very difficult to install buoy lines on the coast. In 2011 GAEC de l’Ostreane lost the entire production and installation of buoy longlines it had in its concession, and therefore decided to change to TEPSA’s floating pipes system, wich is proving to be the only one capable of resisting the storms and currents in that area.

It is composed of 5 parallel lines of 130 m. each, wich have pieces from wich to hang the mussel ropes spaced 1 m. 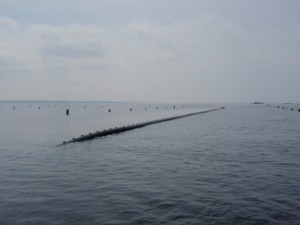 This french company has been cultivating mussels offshore for several years. They started using surface bouy lines, but storms caused severe damage to the installation, even causing the loss of several productions. They subsequently modified the system so that it was half submerged, having achieved acceptable cultivation results faced with storms, however this system is difficult to install and maintain.

In the cultivation park, amongst the half submerged longlines, a 150 m. long floating pipes line was anchored as a pilot poject so that the company Meskler Treger could assess and compare its performance compared to the system they were currently using. 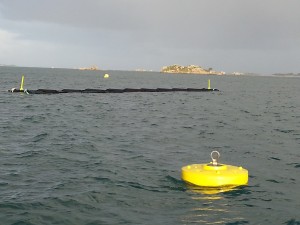 Installation for the cultivation in Paimpol

7. INSTALLATION FOR THE CULTIVATION OF MACRO-ALGAE

ALEOR is a french company pioneer in the cultivation and transformation of macro algae. They have onshore facilities for the reproduction of the species they exploit and a drying room for their marketing, already dry and compacted. The system is organised in 4 platforms wich are each 2 m. wide and 25 m. long, spaced 50 m. from each other. The cultivation ropes make uo a network on the surface, making the most of solar radiation. The anchoring ensures the relative position between them, with 10 mooring points and 6 surface buoys.

The cultivation of macro algae is an activity wich is growing at global level, they are a raw material with multiple applications (pigments, fertilizers, feeding, cosmetics, biofuels, fodder, feedstuffs, etc). Most of the production currently comes from the extraction from the natural environment, wich seems to be reaching its productive peak, whilst the demand and new algae applications continues to increase. The rise in algae prices is making this niche market a very interesting option for aquaculture farmers. 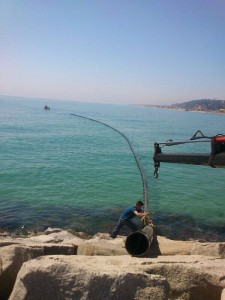 8. LONGLINE FOR THE GROWING OF MUSSELS OFFSHORE

In the concession of an old fish farm, already disappeared, a new project has begun to produce mussel in an open sea area. This area suffers from heavy storms in the winter, wich are a test to resistance of installations. A 150 m. longtube pilot line was installed in order to evaluate its behaviour before the occupation of the whole cultivation park. 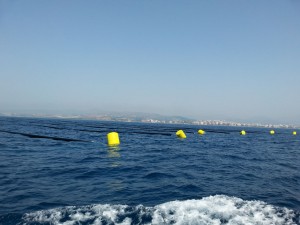 Site with 3.000 m. floating pipe for the cultivation of mussels offshore

9. LONGLINES FOR THE CULTIVATION OF MUSSELS OFFSHORE

This is an ambitious project carried out by investors of the Galician mussel sector who accumulate years of experience in the cultivation of mollusc in the coast of Andalucía. Until now, the mussel rafts and buoy longlines were not doing well, the peculiarities of the Andalusian coast challenge traditional cultivation installations every winter. In order to avoid the problems derived from marine corrosion and storms, a new system has been designed with almost 100% absence of metal and wooden elements. It consists of 6 parallel lines of 500 m. long floating pipes, wich are joined together and with a base made up of a novel slatted floor developed by the producing company itself, formed by polysteel ropes and large volume surface buoys. This installation is designed to produce over 650 tonnes of mussels per year and the objective is to reach 2.200 tonnes in the next 3 years.